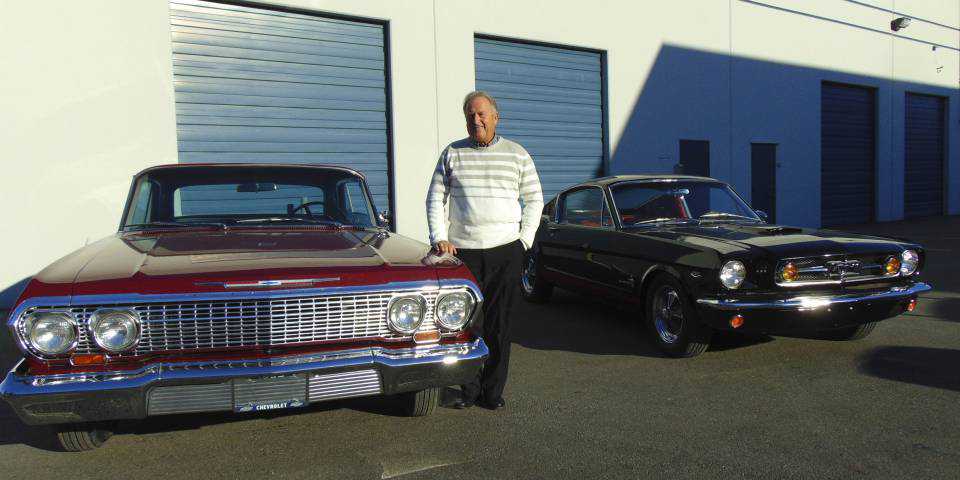 Wayne Darby has learned a thing or two since being battered and bruised when he first started selling classic cars from Canada at the Barrett-Jackson Auction.

On his first visit to the fabled event held each January in Scottsdale, Arizona, the Vancouver wholesale car dealer entered what he thought would be a much sought after stainless steel-bodied Bricklin in which he had invested $14,000. When the auctioneer’s gavel fell, his return was $8,000. Not a good first day.

Always the optimist, he next showed up with a beautifully restored 1957 Oldsmobile convertible and an equally nice 1958 Chevrolet Impala convertible. These cars should ring the bell, he thought.

When the bidding stopped, he no longer owned the Oldsmobile and he had lost $14,000. The Impala sold for a decent price but the new owner kicked it back because the power windows were slow. Wayne had to take that one home.

He remedied the problems and later sold the Impala at an auction in Monterey, California for a $7,000 profit. That was 25 years ago and he has been refining his skills ever since.

Last year, Wayne sold 15 cars at the Barrett-Jackson Auction, including six of his own. He did very well on all of them. A U.S. dollar worth almost one-third more than the Canadian buck certainly helped the cause.

This year, he’s shipping 21 classic vehicles south – more than half of them from collectors in Saskatchewan, Alberta and British Columbia.

“I love the whole process,” the enthusiastic 69-year-old says. “The passion drives you. It’s almost like rolling the dice.”

Wayne is in the auction business with Western Canada Remarketing, a weekly online auction mainly selling lease returns and fleet vehicle disposals for large companies such as B.C. Hydro and TransLink. His son Cody is the operations manager. His other son Michael assists in logistics when he is not a professional caddy on the PGA Tour. The auction company boasts 1,700 dealerships in B.C. and Alberta as customers.

Wayne was a typical teenager in love with the customized Fords his older brother and friends drove. At the age of 15, he paid $35 for his uncle’s 1949 Chevrolet fastback, which he customized and hot rodded by adding triple carburetors and dual exhausts.

Following graduation, he spent two years as an ironworker and, after falling from a bridge into a river in Prince Rupert, quit his job and came back to Vancouver. Instead of buying a house with money he had saved, he bought a 1965 Pontiac GTO with the 389 cubic inch tri-power engine and four-speed transmission.

He joined the Richmond Fire Department and got into buying and selling cars on the side during his 20-year firefighting career.

Always a car enthusiast, he has a collection of restored muscle cars and restomods – classics that look original but have high horsepower engines.

He opened a Suzuki dealership after leaving the fire department but decided retailing cars wasn’t for him. So he went into the automobile wholesale business with Chevrolake Motor Cars specializing in cross-border sales.

Over the years, he has developed a strong bond with the Barrett-Jackson team. A lot of what he does is to ensure the cars he is representing or selling don’t have issues.

“We make sure everything works. I don’t want to get a bad name,” he says.

His hopes are to get at least his estimated value in U.S. funds for the vehicles heading for the Arizona auction:

He has VIP status at the Barrett-Jackson auction and views proceedings from the Sky Box where big name collectors like Rick Hendricks hang out.

“Barrett-Jackson has created a lifestyle and people want to be part of that,” Wayne says.

He represents every car he sells by talking directly to the auctioneer as the vehicle heads onto the auction block.

“They always ask where I need to be on the price,” he says.

“I inflate what I need by one third so the auctioneer keeps going until he gets all the money.”

If he is representing someone else’s car, he has them on the phone as the auction proceeds so the owner knows what is being bid.

Ultimately, the cars he represents are sold with no reserve bidding. So they will go to a new owner when the gavel falls.

“You have some movement when cars are selling for one third more because of the strong U.S. dollar,” he says.

Canadians watching the Arizona auction on television are always fascinated by the millions of dollars changing hands between buyers and sellers in a matter of a few minutes. If you see a really busy guy repeatedly running between the Sky Box to the stage representing cars that came from Canada, chances are you will be looking at Vancouver’s Wayne Darby.

Here are the steps Wayne Darby goes through to sell a Canadian classic at a U.S. auction:

Prime time Barrett-Jackson spots cost $1,000 to $1,500 U.S. each. The auction sales commission is eight per cent. Wayne pays all the costs up front for the cars he represents including transportation, border import and auction fees.